THANK YOU...for the bearings..really great servise..will buy again and will recomended as well

The history of SKF bearings

The company was founded on Sven Wingqvist's 1907 Swedish patent No. 25406, a multi-row self-aligning radial ball bearing. The Patent was granted on June 6 in Sweden coinciding with patents in 10 other countries. The new ball bearing was successful from the outset. By 1910, the company had 325 employees and a subsidiary in the United Kingdom. Manufacturing operations were later established in multiple countries.

By 1912, SKF was represented in 32 countries and by 1930, a staff of over 21,000 were employed in 12 manufacturing facilities worldwide. Assar Gabrielsson, SKF sales manager and Björn Prytz, Managing Director of SKF were the founders of Volvo AB in 1926. In the beginning, the company functioned as a subsidiary automobile company within the SKF group. SKF funded the production run of the first thousand cars, built at Hisingen, in Gothenburg, beginning in 1927. SKF used one of the company's trademarked names: AB Volvo, which derives from the Latin "I roll", with its obvious connotations of bearings in motion. The ownership of Volvo lasted until 1935 when the last shares were divested. In the 1970's SKF embarked on a massive production rationalization program in Europe. A visionary project, "Production Concept for the 80's" was launched with the aim to run the night shifts practically unmanned. To increase productivity and safeguard the product quality, a continuous, automatic flow of bearing rings was needed. This is why the Flexlink multiflex plastic chain conveyor system was developed. The ownership of FlexLink lasted until 1997 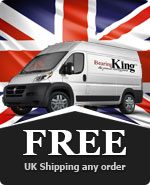